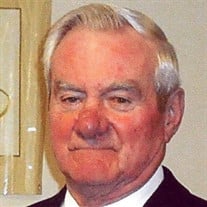 Jerry E. Swingle, 82 of Zanesville, died 9:10 PM, Wednesday, June 10, 2015 at Genesis Good Samaritan CCU. Jerry was born Sunday, August 21, 1932 in Zanesville, the son of Lawrence Swingle and Beulah I. (Bridwell) Swingle. He married Dorothy J. “Jean” Swingle on Saturday, January 3, 1959. Jerry served his country as a veteran of the United States Army where he was stationed in Germany. He worked in the construction and trucking industry and was a farmer and enjoyed working the land. He was an active member of St. Thomas Aquinas Church where he served on the funeral luncheon committee and counted money every Monday. Jerry was a fan of John Wayne and enjoyed westerns and war movies. Jerry was an animal lover and cared deeply for his two dogs and cat. He was a loving and caring husband, father and grandfather who enjoyed spending time with them and caring for them. Jerry is survived by five children: Kimberley (John) Lilley of Grove City, Sharon (Keith) Wilson of Duncan Falls, Jerry (Jodie) Swingle, Jr. of Zanesville, Dorothy “Dodi” Swingle of Boulder, CO and Heidi (Billy) Williams of Zanesville; many grandchildren and great grandchildren; one sister-in-law: Maryann (Ron) Fox of Zanesville and several nieces and nephews. In addition to his parents, Jerry was preceded in death by his beloved wife: Jean Swingle who died on March 30, 2015; two sisters: Margarette & Russ Fitz and Susanne Swingle and two brothers: Bill & Pat Swingle and Bob Swingle. Friends may call from 2:00 to 4:00 & 6:00 to 8:00 PM, Sunday, June 14, 2015 at The Hillis, Combs & Nestor Funeral Home, 935 Forest Avenue, Zanesville where a Christian Vigil will be held at 7:45 PM. Mass of Christian Burial will be celebrated at 10:00 AM, Monday, June 15 at St. Thomas Aquinas Catholic Church, 144 North Street, Zanesville. Jerry will be laid to rest next to his beloved wife, Jean in Mt. Calvary Cemetery where VFW Post 1058 will conduct Full Military Honors. Memorial contributions may be made to Muskingum Valley Right to Life, c/o Sue Maxwell, Treasurer, 200 Christopher Place, Zanesville, Ohio 43701 in Jerry’s memory. To sign the online register book or to send a personal condolence note please visit www.hilliscombsnestor.com

The family of Jerry E. Swingle created this Life Tributes page to make it easy to share your memories.

Send flowers to the Swingle family.