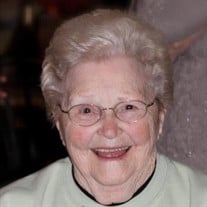 Jeanette Lorraine Baughman, 94, of Zanesville, died 11:58 PM, Friday, April 7, 2017, at her home surrounded by her family, following an extended illness. She was born Saturday, March 24, 1923 in Chicago, IL, the daughter of Earl R. Hankins and Julia (Trunko) Hankins. She married Cecil F. Baughman on Monday, September 2, 1946, who preceded her in death on Monday, December 20, 1999. Jean was a graduate of Moxahala High School and Meredith Business College. After graduation she worked for Merrill Lynch in the Masonic Temple Building as a Ticker Tape Reader. Jean was an excellent seamstress and also worked doing alterations for Naders and Larry Wades Clothing. She enjoyed knitting and crocheting, was an avid NASCAR fan especially #3 Dale Earnhardt, and greatly enjoyed the time she spent with the neighborhood “Coffee Klatch” the “West Pike Gals.” Jean was an active and devoted member of St. Thomas Aquinas Catholic Church and St. Thomas School. Jean was most proud of her family and her children. Being the best mother and grandmother was very important to her. Each one of her 10 children felt the love and care as if they had each been only children. Because of her strength as the matriarch the family is very close and is supportive of each other. Jean is survived by five daughters, Mary Ann Ewart, Linda (Reid) Baughman, Martha (Tom) Sullivan, Teresa (James) Reef and Denise Baughman all of Zanesville; five sons, Lawrence (Amy) Baughman of Athens, IL, John (Theresa) Baughman of Zanesville, James (Tammy) Baughman of Moxahala, Thomas (Monica) Baughman and Dennis (Holli) Baughman all of Zanesville, 23 grandchildren, several great grandchildren and several nieces. In addition to her parents and husband she was preceded in death by one brother, Ray Hankins and one sister, Betty Haren. Friends may call from 2:00 to 4:00 & 6:00 to 8:00 PM, Monday, April 10, 2017, at the Hillis, Combs & Nestor Funeral Home, 935 Forest Avenue, Zanesville, where the Rosary will be recited at 7:45 PM. Mass of Christian Burial will be celebrated 10:00 AM Tuesday, April 11, 2017, at Saint Thomas Aquinas Catholic Church, 144 North Fifth Street, Zanesville, with a Dominican Father as celebrant. Burial will conclude in the Mt. Calvary Cemetery. Memorial contributions may be made to St. Jude’s Children’s Hospital, 262 Danny Thomas Place, Memphis, TN 38105, Nationwide Children’s Hospital, 700 Children's Drive Columbus, Ohio 43205 or St. Thomas Aquinas Cemetery Restoration Fund, 144 North Fifth Street, Zanesville, Ohio 43701 in Jean’s memory. To sign the online register book or to send a personal condolence note please visit www.hilliscombsnestor.com

Jeanette Lorraine Baughman, 94, of Zanesville, died 11:58 PM, Friday, April 7, 2017, at her home surrounded by her family, following an extended illness. She was born Saturday, March 24, 1923 in Chicago, IL, the daughter of Earl R. Hankins and... View Obituary & Service Information

The family of Jeanette L. Baughman created this Life Tributes page to make it easy to share your memories.

Send flowers to the Baughman family.