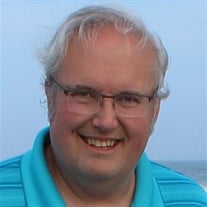 James “Jim” Dickson, 54, of Nashport, passed away 4:30 am, Wednesday, February 20, 2019, at Genesis Hospital, following complications from a brain aneurysm. He was born February 9, 1965, in Zanesville, the son of Robert & Louise (Hivnor) Dickson. Jim was a graduate of Maysville High School, Mid East Career Center specializing in Electronics, and attended MATC. Jim retired from Armco/AK Steel in 2015 following over 32 years of service. During is tenure at Armco/AK he served as ZAIO Union President. Jim’s retirement years were filled with many hobbies including woodworking, computer technology, and enjoying home brewing ciders and ales with his son, Devin. In recent years, he spent most of his time with his Golden Doodle Parker, whom he and his wife trained to be a therapy dog. He loved taking Parker on walks and to the Riverside Dogzville Dog Park; in the last year they even took Parker on vacations to the Outer Banks, North Carolina and the Smoky Mountains. Jim had a love for physics, astronomy, mathematics, and enjoyed Carl Sagan’s quote, “We are all made of star-stuff.” Jim had a passion for traveling, especially on cruises and to the ocean. Jim will be remembered for his America cowboy hat, Jimmy Buffett tunes, and his homemade hard tack candy. Jim is survived by Jodi (Wilson) Dickson, his loving wife of 30 years, two sons Derek (Camille) Dickson of Parma, and Devin Dickson of Nashport, and one sister Sandy (Dick) Burke of Nashport. His family will always remember his great smile and wonderful sense of humor. He was preceded in death by his parents Robert and Louise Hivnor Dickson and brother Steve Dickson. Friends may call Saturday, February 23, 2019, from 10:00 AM till 12 Noon at the Hillis, Combs & Nestor Funeral Home, 935 Forest Avenue, Zanesville, where Services to Celebrate Jim’s Life will be held at 12 Noon with Chaplin Vickie Kumorowski officiating. Memorial Contributions may be made to Riverside Dogzville Dog Park, c/o Muskingum County Community Foundation, 534 Putnam Avenue, Zanesville, OH 43701 in Jim’s memory. To sign the online guestbook or leave a personal note of condolence please visit www.hilliscombsnestor.com

The family of James "Jim" Dickson created this Life Tributes page to make it easy to share your memories.

Send flowers to the Dickson family.