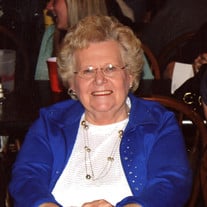 Irene Catherine Dillon, passed away peacefully at her home surrounded by her loving children and husband, Wednesday, April 6, 2016. She was born February 28th, 1932 in Noble County, a daughter of the late Earl and Theresa (Crum) Huffman. Irene graduated from Dexter High School before moving to the Zanesville area where she met her husband of 62 years, Richard E. Dillon. It is here where she raised her children and touched the lives of many. A woman of strong faith, Irene believed in reaching out to help others, with her kindness and loving generosity. Irene retired from the General Electric Company in 1982 after 28 years of service. She was a faithful member of Saint Nicholas Catholic Church. Over the years she belonged to various organizations including the Daughters of Isabella, the Rosecrans Boosters, and the Women’s Auxiliary of the V.F.W. Her greatest joy in life was spending time with her family and friends. She loved attending her children and grandchildren’s activities and sporting events. A wonderful mother and cook, her Sunday dinners and warm hospitality were enjoyed by many over the years. In addition to her husband, she is survived by four children: Jack (Sue Palmer) Dillon, Marianne (Loren) Bates, Shirley (Dan) Knox, and Steve (Judy Tolley) Dillon. She was dearly loved by her grandchildren: Matt, Brad, and Trent (Jamie) Dillon, Ryan (Jodie) Bates, Andrea (Jon) Arnold, Kolby and Stephen Knox, Katie (Ryan) LaFleur, and Jordan Dillon. She was blessed with six great-grandchildren: Aubree Bates, Harper and Piper Dillon, Graham and Ava Irene Arnold, Finley LaFleur, and one great-grandchild on the way. Irene has one sister, Ruth Ann (Kenny) Sager of Chevy Chase, MD; two aunts, Pauline Robey and Mary Crum both of Caldwell, OH; a special “granddaughter”, Karly Bruns; and special friends, Trent (Cheryl) Ankrum. She was a beloved sister-in-law and very special aunt to her many nieces and nephews. Irene had many wonderful friends and neighbors that were very dear to her heart, including the Herron’s, Wolfe’s, and Turner/Swope’s. In addition to her parents; Irene was preceded in death by one brother, Ralph (Donna) Huffman; and a stepfather, Hillary Sailing. The family will receive friends from 4:00 to 8:00 p.m., Sunday, April 10, 2016 at the Hillis, Combs & Nestor Funeral Home, 935 Forest Avenue, where a Christian Vigil will be held at 7:45 PM. Mass of Christian Burial will be celebrated at 10:30 a.m. Monday, April 11, 2016 at St. Nicholas Catholic Church, 925 East Main Street, Zanesville with Fr. Martin Ralko as celebrant. Burial will follow in Memorial Park Cemetery. Memorial contributions may be made to Genesis Hospice & Palliative Care, 713 Forest Avenue, Zanesville, Ohio 43701 or American Cancer Society, Central Ohio Chapter, 5555 Frantz Road, Dublin, OH 43017 in Irene’s name.

Irene Catherine Dillon, passed away peacefully at her home surrounded by her loving children and husband, Wednesday, April 6, 2016. She was born February 28th, 1932 in Noble County, a daughter of the late Earl and Theresa (Crum) Huffman. Irene... View Obituary & Service Information

The family of Irene Catherine Dillon created this Life Tributes page to make it easy to share your memories.

Irene Catherine Dillon, passed away peacefully at her home surrounded...

Send flowers to the Dillon family.