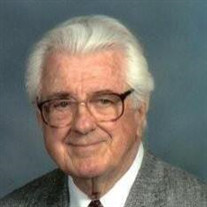 Henry A. Sulens, 90 of Zanesville, passed away peacefully at 2:48 AM, Sunday, May 8, 2016 at Zanesville Health & Rehab Center. He was born Saturday, June 13, 1925 in Erie, PA the son of William Sulenski and Stella (Zaremba) Sulenski. He married Florence B. (Hunter) Sulens on Saturday, June 19, 1948 and was a member of St. Nicholas Catholic Church. Following graduation from high school Henry studied for the Priesthood at St. Mary’s in Orchard Lake Village, MI, prior to attending college. Henry was a 1949 graduate of The Ohio State University and spent his professional career in the ceramics field. He served as sales manager for Ferro Corporation CESCO Plant in Crooksville, president of the Hull Pottery Company in Crooksville, and retired from Ferro Corporation in Cleveland. Henry was Past President of the Southeastern Ohio Ceramic Society and a Fellow of The American Ceramic Society. He was a former member of Zanesville Toastmasters Club, Knights of Columbus, Elks Lodge, Zanesville Jaycees and the Zanesville Country Club, where he was an avid golfer and gin player. Henry is survived by three sons: Thomas N. (Bonnie S.) Sulens of Zanesville; Robert H. Sulens of San Diego, CA and Christopher H. Sulens of Zanesville; five grandchildren: Hillary (Adam) Kocoloski of Milton, MA, Michael (Nancy) Sulens of Zanesville, Jonathan R. Sulens of Zanesville, Neil (Katie) Bertrando of Reno, NV and Marc Bertrando of Reno, NV; three great granddaughters: Chloe, Sloane & Daphne Kocoloski; one sister: Marcella Trafas of Wilmington, DE and many nieces and nephews including Susan (Colin) Davis of Birmingham, AL. In addition to his parents, Henry was preceded in death by his wife of over 66 years Florence Sulens; a daughter: Barbara Bertrando; a sister: Regina Swider and three brothers: Richard, William & Eugene Sulenski. Friends may call from 2:00 to 4:00 & 6:00 to 8:00 PM, Friday, May 13, 2016 at the Hillis, Combs & Nestor Funeral Home, 935 Forest Avenue, Zanesville, where a Christian Vigil will be held at 7:45 PM. Mass of Christian Burial will be held 10:30 AM, Saturday, May 14, 2016 at St. Nicholas Catholic Church, 925 Main Street, Zanesville with Fr. Martin J. Ralko as celebrant. Henry will be laid to rest next to his beloved wife in Memorial Park Cemetery. Memorial Contributions may be made to St. Nicholas Catholic Church, 925 Main Street, Zanesville, Ohio 43701. To sign the online guestbook or leave a personal note of condolence please visit www.hilliscombsnestor.com.

Henry A. Sulens, 90 of Zanesville, passed away peacefully at 2:48 AM, Sunday, May 8, 2016 at Zanesville Health & Rehab Center. He was born Saturday, June 13, 1925 in Erie, PA the son of William Sulenski and Stella (Zaremba) Sulenski. He married... View Obituary & Service Information

The family of Henry A. Sulens created this Life Tributes page to make it easy to share your memories.

Henry A. Sulens, 90 of Zanesville, passed away peacefully at...

Send flowers to the Sulens family.