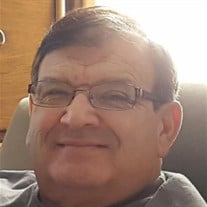 Harold K. "Cal" Pritchard, 73, of Zanesville, died 3:10 PM, Thursday, September 26, 2019, at Genesis Hospital Emergency Department following a sudden illness. He was born Thursday, August 1, 1946, in Zanesville, the son of Kenneth Pritchard and Goldie Bell (Kirkbride) Pritchard. He married the love of his life, Mary J. (Weiser) Pritchard on Saturday, May 15, 1971, and was a member of St. Nicholas Catholic Church. He was a retired truck driver for Mattingly Foods, and worked at MCBDD as a bus driver after his retirement. He served in the US Army as an Army Specialist E-4 Military Police during the Vietnam War and was a member of Lafayette Lodge #79 F&AM, Amrou Grotto, and American Legion Post #29. Cal was a former Commander and currently serving as Quartermaster of VFW Post #1058. He is survived by his loving wife and is survived by three children, Melanie (Michael Hying) Polk, Julie (David) Mattingly and Adam (Tara) Pritchard all of Zanesville; 11 grandchildren, Lydia, Hunter & Dillon Polk, Diamond Hying, Caleb & Connor Wooley, Clay & Cami Mattingly, Koen, Kason and Haylee Pritchard; Brothers, Lawrence “Chief” (Sheila Blake) Novaria, Daniel (Becky) Pritchard; Brothers-in-law, Victor Duff, Jr. and Leonard (Moose) Hardman, and one aunt Vera Goldsmith; and several nieces, nephews and cousins. He was preceded in death by his parents, sisters, Esther Seckman, Shirley Hardman, Nina Duff, Diane Gillogly, Thelma Novaria, one brother Kenneth Pritchard and a son-in-law, Pete Polk. He was a loving and devoted husband, father and grandfather. He was a proud veteran, spending countless hours helping other veterans through the VFW. He enjoyed spending quality time with his family whether it was camping, fishing at the “The Ponds” or watching his grandchildren at one of their many activities. He loved harmonizing and singing karaoke with his brothers and sisters. He always put others first and was prepared with treats for anyone he encountered. Friends may call from 2 to 4 & 6 to 8 on Sunday, September 29, 2019, at the Hillis, Combs & Nestor Funeral Home, 935 Forest Avenue, Zanesville. A funeral service will be held 11 AM Monday, September 30, 2019, at the funeral home with Fr. Martin Ralko officiating. The United States Army, VFW Post 1058 and American Legion Post 29 will render full military honors at the funeral home. Burial will be held in the Mount Olive Cemetery at a later date. To sign the online register book or to send a personal condolence note please visit www.hilliscombsnestor.com.

The family of Harold "Cal" Pritchard created this Life Tributes page to make it easy to share your memories.

Send flowers to the Pritchard family.