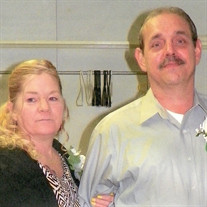 Gregory A. "Greg" Starkey, 54 of Zanesville, died, Sunday, May 31, 2015 following a sudden illness. He was born Saturday, March 4, 1961 in Zanesville, the son of John L. Starkey and Helen L. (Young) Starkey. He married Deborah I. “Debbie” (Ross) Starkey on Friday, April 20, 2001. He was a Master Electrician with Zanesville Metropolitan Housing and had a natural mechanical ability. Greg was an avid NASCAR, Pittsburgh Steelers and Ohio State Buckeyes Fan. He was a genuine honest hard working man who never met a stranger. He enjoyed helping others and received great joy when he could help someone in need. Greg was an animal lover who cared for all his pets. He was a loving and caring husband, father, grandfather, brother and friend. Greg is survived by his wife: Debbie (Ross) Starkey; one son: Kyle & Nicki Robinson and one daughter: Amber Ross both of Zanesville; three grandchildren: Isaiah Robinson, Dalainey Robinson and Zachariah Robinson; two sisters: Sandy Gookins and Tamara Starkey both of Zanesville; two brothers: Robert Starkey of Georgia and Jeffrey Starkey of Zanesville; his mother & father-in-law: Vinton & Vicky Ross of Zanesville; one sister & brother- in-law: Bobbi & Bobby Wood and one brother-in-law: Shawn Ross both of Zanesville; many nieces, nephews, cousins and friends. In addition to his parents, Greg was preceded in death by one brother-in-law: Elmer “Bud” Gookins Friends may call from 2:00 to 4:00 & 6:00 to 8:00 PM, Wednesday, June 3, 2015 at the Hillis, Combs & Nestor Funeral Home, Zanesville where Funeral Services will be held 1:00 PM, Thursday, June 4, with Rev. Dr. Herbert Hicks officiating. Burial will follow in St. Paul Cemetery. To sign the online register book or to send a personal condolence note please visit www.hilliscombsnestor.com

The family of Gregory A. "Greg" Starkey created this Life Tributes page to make it easy to share your memories.

Send flowers to the Starkey family.