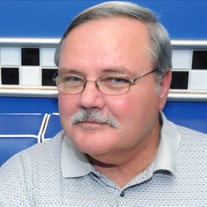 Gordon "Ed" Edward Shearrow, age 65 of Zanesville died 2:47 AM, Friday, January 29, 2016 at Genesis Hospital in Zanesville. He was born Monday, January 8, 1951 in Missouri the son of the late George Gordon Shearrow and Evelyn Alice (Rohlfs) Shearrow. He was married on Saturday, April 6, 1984 to Catherine "Kit” (McCutchton) Shearrow who survives. Ed served in the United States Army Reserves. He was a member Lodge of Amity #5 Free and Accepted Masons of Ohio, the Aladdin Shrine and Zavi Shrine Club where he was president. He was an avid “gear head” and was a member of the Pontiac Oakland Club International and the Corvair Society of America. Ed had a passion for music, especially Classic Rock; where he attended many concerts with his family. He had a great love for all his loving dogs. He enjoyed spending time with his family and friends and will be greatly missed. In addition to his wife he is survived by three daughters, April C. Bailey, Jennifer L. Gallis and Barbara E. Presson all of Zanesville; one step-son, Bradley J. Skowronski of Boulder, CO; seven grandchildren, Scott G. Shearrow, Sydney K. Bailey, Lauren A. Gallis, Brandon M. Gallis, Allyson N. Bailey, Victoria R. Presson and Savanah A. Presson and two brothers, Charles “Chip” (Lynn) A, Shearrow and George “Fritz” (Kim) Shearrow. Donations may be made in Ed's honor to the Shriner’s Children’s Hospitals 2900 Rocky Point Dr. Tampa, FL 33607. Friends may call from 6 to 8 PM on Wednesday, February 3, 2016 at the Hillis, Combs & Nestor Funeral Home 935 Forest Ave. Zanesville where Lodge of Amity #5, Free and Accepted Masons of Ohio, will conduct full Masonic Funeral Rites at 6:00 PM. Visitation will also be held 2 to 4 PM on Thursday, February 4, 2016 at the funeral home, where a funeral service to celebrate Ed’s life will be held at 4PM with Pastor John Alice officiating. To sign the online register book or to send a personal condolence note please visit www.hilliscombsnestor.com.

The family of Gordon "Ed" Shearrow created this Life Tributes page to make it easy to share your memories.

Send flowers to the Shearrow family.