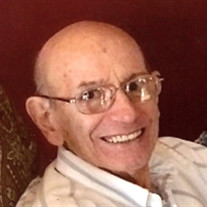 Glenn Roy McCutcheon, age 79 of Zanesville, passed peacefully with his family by his side at 8:25 AM, Sunday, October 23, 2016 at his home following a long illness. He was born Thursday, November 26, 1936 in Zanesville, the son of William T. McCutcheon and Clarice (Moore) McCutcheon. He was married on Wednesday, July 24, 1957 to Phyllis Ann (Sands) McCutcheon who preceded her in death on Friday, December 8, 2006. He was a Christian by faith. Glenn served in the United States Army. Mr. McCutcheon was the owner and operator of the Columbia Machine Shop located on Hughes St. He was also a longtime member of the Zanesville Sertoma Club and the Timber Run Grange. He was a loving brother, father, grandfather, great-grandfather and a wonderful friend. Glenn is survived by two daughters; Vicki Sue (Adam) Higgins of Zanesville and Valli Jo (Michael) Delaney of Lancaster; one son, John (Jennie) McCutcheon of Zanesville; six grandchildren, Chrystal (Aaron) Gumminey, Wynter (Jason) Morris, Melody Delaney, Adrian McCutcheon, Austin McCutcheon and Michael Cooper; three great grandchildren, Abigail, Colson and Graham; one sister, Bessie (Max) Hittle of Dresden and one brother, John “Eddie” (Sylvia) McCutcheon of Upatoi, GA. In addition to his wife and parents he was preceded in death by one infant daughter, Valerie McCutcheon; and four sisters, Josephine Sheets, Peggy Schneider, Helen Shankle, Sally Hampton and Wanda McCutcheon: two brothers William T. McCutcheon and Joseph McCutcheon. The family would like to thank the staff of Genesis Hospice for the wonderful care they provided. Donations may be made in Glenn’s honor to the Genesis Hospice, 713 Forest Ave. Zanesville; Friends may call from 2:00 PM to 4:00 PM & 6:00 PM to 8:00 PM on Wednesday, October 26, 2016 at the Hillis, Combs & Nestor Funeral Home, 935 Forest Avenue, Zanesville. A funeral service will be held 11:00 AM on Thursday, October 27, 2016 at the funeral home with Rev. Jim Miller officiating. Burial will conclude in the Zanesville Memorial Park where the US Army, VFW Post #1058 and the American Legion #29 will conduct full military honors. To sign the online register book or to send a personal condolence note please visit www.hilliscombsnestor.com

Glenn Roy McCutcheon, age 79 of Zanesville, passed peacefully with his family by his side at 8:25 AM, Sunday, October 23, 2016 at his home following a long illness. He was born Thursday, November 26, 1936 in Zanesville, the son of William... View Obituary & Service Information

The family of Glenn R. McCutcheon created this Life Tributes page to make it easy to share your memories.

Send flowers to the McCutcheon family.