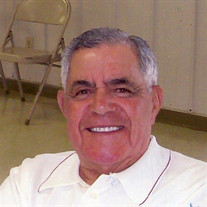 Glenn Kennedy, age 90, of Zanesville, died 8:05 AM, Tuesday, August 15, 2017, at Willow Haven Care Center in Zanesville. He was born Monday, October 25, 1926, in Lathrop, OH, the son of William Kennedy and Jessie (Minerd) Kennedy. He was married on Saturday, December 27, 1952, to Bonnie (Mayle) Kennedy who survives. He was a Christian by faith and was a cement truck driver for Adams Brothers, retiring after 41 years. Glenn served in the United States Army Air Corps. He was a longtime member of the Zanesville Esquire Club. After Glenn retired, he enjoyed spending time at Bates Auto Isle and traveling with his wife with Freedom Years. He enjoyed golfing with his friends and watching sports on television. He was a loving father and husband and will be missed by all his family and friends. In addition to his wife, he is survived by one daughter, Vickie Kennedy, of Columbus, and numerous nieces, nephews and cousins. In addition to his parents, he was preceded in death by five sisters, Grace Hardin, Delcie Lewis, Della Churchill, Thelma Jackson, and twin sister, Glenola Barnett and infant brother, William Thaddeus Kennedy. Friends may call from 2 to 4 PM & 6 to 8 PM on Sunday, August 20, 2017, at the Hillis, Combs & Nestor Funeral Home, 935 Forest Avenue, Zanesville. A funeral service will be held 12 Noon on Monday, at Wings of Hope Tabernacle with Rev. Terry F. Newman officiating. Burial will conclude in the Woodlawn Cemetery in Zanesville.

The family of Glenn Kennedy created this Life Tributes page to make it easy to share your memories.

Send flowers to the Kennedy family.