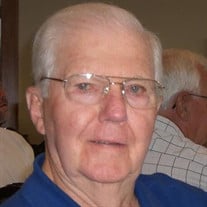 Francis “Frank” Harold Carpenter, 94 of Zanesville, OH died Saturday, September 23, 2017 peacefully at his home with wife and children. He was born August 20, 1923 the son of the late Howard J. and Grace M. (Vogt) Carpenter. Francis was a member of St. Thomas Aquinas Catholic Church. He retired after 32 years as a Teamster with International-Cook Motor Freight. He was involved with the Muskingum Valley Old Timers Association overseeing the care and upkeep of Gant Municipal Stadium; he was inducted into the Muskingum Valley Old Timers Baseball Hall of Fame in 1990. Along with his brother Paul and others he laid out the original baseball diamonds for Y-City Midget League. He was a World War II Navy Veteran enlisting at the age of 17 when his parents had to sign in order for him to enlist. Remembered as a slick fielding shortstop he signed a contract with the old Brooklyn Dodgers system in 1947. Francis was also a member of the Knights of Columbus Council 505. His love was being a part of the activities of his grandchildren. Surviving are his wife of 69 ¾ years Rita Lou McGrath, children Tere (Bruce) Barclay of Zanesville, Ted (Kathy) Carpenter of Zanesville, Trudy (Peter) Cultice of Zanesville, Kelly Carpenter of Zanesville, Michael Carpenter of Cambridge, Jeff (Sandy) McFarland of Zanesville. Grandchildren Brian, Brad (Heather) and Blair Barclay, Ryan (Jodi) Carpenter all of Zanesville, Alex Cultice of Phoenix, Arizona, Sarah Cultice of Fort Myers, Florida, Cole Carpenter of Cleveland, Paige Carpenter of Zanesville. Great grandchildren Drew and Tyler Carpenter, Blade and Myleigh Barclay, sister Teresa Smith of Canal Winchester and sister in law Martha Carpenter, many nieces, nephews, and special friends Jennifer Ward, and Tammy Archer. In addition to his parents he was preceded by his brothers Paul Carpenter and James Carpenter and his wife Charlotte, sister Marguerite McFarland and her husband James, brother-in-law Bill Smith. Friends may call Thursday, September 28, 2017 at the Hillis, Combs, and Nestor Funeral Home, 935 Forest Avenue from 2-4 and 6-8 PM. A funeral service will be held Friday, at 1 PM at the funeral home with Fr. Martin Ralko as officiant. Burial will conclude in the Zanesville memorial Park where the United States Navy, VFW Post #1058 and American Legion Post #29 will conduct full military honors. Memorial contributions in Francis’ name can be made to charity of choice.

The family of Francis H. "Frank" Carpenter created this Life Tributes page to make it easy to share your memories.

Send flowers to the Carpenter family.