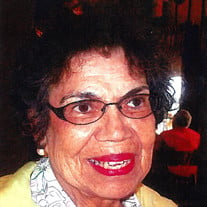 Estelle Silva Zakany went to be with the Lord in her home on Friday 1/26/2018 at 1:05 PM. Estelle was born to José León Silva and Luz (Madrid) Silva on May 23, 1929 in Las Vegas, NM. Estelle’s mother passed when she was only six. As the second youngest of 7 children she was cared for by her older siblings while her father was working. This created very strong bonds between them all. She deeply loved her brother Noverto, and her sisters Barbara, Lena, Petra, Ramona, and Matilda. Estelle came to Zanesville from Clovis, NM in 1945. That is where she met and married Albert Dale Zakany who was in Clovis for training with the Army Air Corps. They remained together until Albert’s passing in 2005. When Al returned from WWII he and Estelle worked at, and eventually took over, his parent’s grocery store, Zakany’s Foodtown. They, along with Al’s brother Theodore C. (Ted) Zakany and his wife, Doris, ran the store until its closing in 1990. Estelle and Albert had six children: Charlotte (Jeff McCray), Albert Dale II (Susan), Michael, Mary Beth, Jeff, and David. She has 9 grandchildren, 11 great grandchildren, five great-great grandchildren, and numerous nephews and nieces. She was proud of her heritage and that was reflected in the fact that Zak’s restaurant - started by her husband and children Al and Mike in 1977 - began serving southwestern dishes inspired by her own recipes. She helped Mike when he left Zak’s to start up Jose Madrid Salsa which was also inspired by her home made salsa. Estelle was an active member of St. Thomas Aquinas church and had a deep love for all the friends she made there. Her passion for her faith in Christ was an inspiration to all who came to know her. She loved her adopted hometown of Zanesville and served the community by volunteering in schools, volunteering in hospitals, serving as chaperone for TVHS band trips, serving as a Eucharistic minister, and volunteering to raise funds for charities. She was an avid sports fan and loved her Reds baseball. She had a positive impact on many lives in part because she always had an upbeat attitude, a great zest for life, and full of laughter. Estelle wasn’t one to merely talk about being virtuous and having integrity; she lived it. Everyone who came to know Estelle loved her. Friends may call from 6:00 to 8:00 PM, Tuesday, January 30, 2018, and 2:00 to 4:00 & 6:00 to 8:00 PM, Wednesday, January 31, 2018, at the Hillis, Combs & Nestor Funeral Home, 935 Forest Avenue, Zanesville. Funeral Mass will be celebrated 10:30 AM, Thursday, February 1, 2018, at St. Thomas Aquinas Catholic Church, 144 North Fifth Street, Zanesville, with Fr. Jan C.P. Sullivan, as Celebrant. Estelle will be laid to rest beside her husband, Al in Zanesville Memorial Park. Memorial Contributions may be made to St. Thomas Aquinas Catholic Church in Estelle’s memory. To sign the online register book or to send a personal condolence note please visit www.hilliscombsnestor.com

The family of Estelle Silva Zakany created this Life Tributes page to make it easy to share your memories.

Estelle Silva Zakany went to be with the Lord in her home on...

Send flowers to the Zakany family.