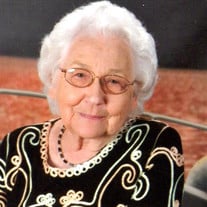 Elizabeth Ward, age 94 of Zanesville, passed away with her family by her side at 11:30 PM, Wednesday, December 26, 2018, at The Oaks at Bethesda in Zanesville. She was born Saturday, January 12, 1924, in Honaker, VA, the daughter of Albert Stump and Carrie Hubbard. She was married on Friday, November 24, 1944 to Marvin R. "Dick" Ward who preceded her in death on Saturday, March 15, 2008. She was a member of Finley United Methodist Church, and worked as a cafeteria supervisor for West Muskingum Schools. She was very active in the fund raising for the West Muskingum Academic Fund and was a member of the Falls Township Vol Fire Department Ladies Auxiliary. She enjoyed camping with her husband and cherished spending time with her family especially her grandchildren. Elizabeth is survived by one daughter, Linda (Dr. Donald) Twiggs of Callahan, FL; one son, Michael (Mary Beth) Ward, of Zanesville, and one daughter-in-law Nancy Ward of Clearwater, FL; six grandchildren, Christopher (Dr. Diana) Twiggs of FL, Lisa (Douglas) Gates, Thomas Ward of Clearwater, FL, Steven (Brittany) Ward of Zanesville, Jennifer (Richard) Holmes of Westerville, OH, Michael Paul (Sarah) Ward of Zanesville, and Leslie Ward of Zanesville; eleven great-grandchildren and several nieces and nephews. In addition to her parents and husband she was preceded in death by one son, Steven Ward, nine brothers and two sisters. The family would like to express their gratitude for all the love and supportive care Elizabeth received from the staff of Hospice of Central Ohio, especially Ruth and Sheri, and also, the loving staff at the Oaks at Bethesda. Friends may call from 2 to 4 PM & 6 to 8 PM on Sunday, December 30, 2018, at the Hillis, Combs & Nestor Funeral Home, 935 Forest Avenue, Zanesville, and 10 AM to 11 AM on Monday, December 31, 2018. A funeral service will be held 11:00 AM on Monday at the funeral home with Pastor Ron Griffin officiating. Burial will conclude in the Williams Cemetery Zanesville. To sign the online register book or to send a personal condolence note please visit www.hilliscombsnestor.com.

Elizabeth Ward, age 94 of Zanesville, passed away with her family by her side at 11:30 PM, Wednesday, December 26, 2018, at The Oaks at Bethesda in Zanesville. She was born Saturday, January 12, 1924, in Honaker, VA, the daughter of Albert... View Obituary & Service Information

The family of Elizabeth Ward created this Life Tributes page to make it easy to share your memories.

Elizabeth Ward, age 94 of Zanesville, passed away with her family...

Send flowers to the Ward family.