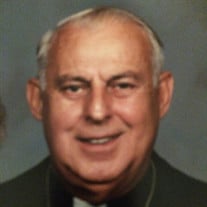 The Reverend Edward Leroy Gard, Jr. entered eternal rest on November 18, 2016. He was born in Detroit, MI on December 28, 1927 to Edward Leroy Gard, Sr. and Edith Mae Boadway Gard. After graduating from Wittenberg University and Hamma School of Divinity in Springfield, OH he was ordained into the Lutheran ministry in 1951. That same summer, he married Margaret Louise Whyde/Runk. Pastor Gard served parishes in Hillsdale, MI; Columbus, OH; Lancaster and Amanda, OH and Canal Winchester, OH. He served as a chaplain in the United States Air Force for 23 years and retired as a Lieutenant Colonel in 1975. His ministry in uniform extended from the Korean War to the Vietnam War and continued as an active member of the Veterans of Foreign Wars and American Legion. He and his wife Margaret celebrated 65 years of marriage on July 14, 2016. As young people they found the love of their lives and lived faithfully to each other and their faith. Their love survived and thrived through the challenges of military deployments and set a model for all who know them. He was preceded in death by his parents and sisters, Florence Gard Fox and Bonnie Gard Bresz. He is survived by his beloved wife Margaret of Zanesville, OH; two daughters, Ellen and William Mallory of Richmond, VA and Eileen and Dwayne Liles of Zanesville, OH; two sons, Paul Gard of Columbus, OH and Daniel and Annette Gard of River Forest, IL; eleven grandchildren and eight great-grandchildren. Friends may call 5:00 to 7:00 PM, Sunday, November 20, 2016 at the Hillis, Combs & Nestor Funeral Home, 935 Forest Avenue, Zanesville and one hour prior to services from 10:00 AM till 11:00 AM at the church. Funeral Services will be held 11:00 AM, Monday, November 21, 2016 at Trinity Evangelical Lutheran Church, 128 South 7th Street, Zanesville with Rev. Dan Bell officiating. Rev. Gard will be laid to rest in Zanesville Memorial Park with the United States Air Force, VFW Post 1028 and American Legion Post 29 conducting Full Military Honors. Memorial contributions may be made to Trinity Evangelical Lutheran Church in Rev. Gard’s memory. To sign the online guestbook or leave a personal note of condolence please visit www.hilliscombsnestor.com

The family of Rev. Edward "Lee" L. Gard Jr. created this Life Tributes page to make it easy to share your memories.

Send flowers to the Gard family.