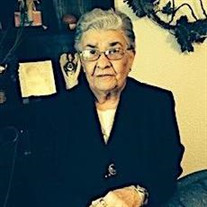 Edley H. Clark Martin of Zanesville, OH passed away peacefully on Saturday, June 1, 2019, at the age of 93, surrounded by her loving family at Genesis Hospital following a sudden short illness. Born December 29, 1925, in Lawyers, Virginia, to the late James and Hester Clark. She spent most of her childhood in Lawyers and later at Anjean, WV. She attended Bolling High School in Lewisburg, WV and then graduated from Bluefield State College in 1948 with a BS degree. She later met and married her husband of 49 years, the late Bobbie O. Martin, on June 22, 1948. She retired from Zanesville City Schools in 1989 after teaching at Zanesville High School for 26 years. From the moment she became a mother, she devoted her life to her family. She was always there for any and every event and was the loudest cheerleader for her children and the students she taught over the years. She always wanted the best for her children and gave constant encouragement and love. In addition to her parents, Edley was preceded in death by her beloved husband Bobbie O. Martin, son Larry C. Martin, grandson Joel A. Martin, brother Charlie G. Clark, brother Lloyd J. Clark and sister and best friend Jeanie C. Hendricks. Edley leaves many loved ones to cherish her memory including her children: Sons Terry M. Martin (Connie) of Zanesville, Gary V. Martin (Chris) of Pataskala, Jerry “OKEY” Martin (Diana) and Daughter Flora Martin, Zanesville. She also leaves behind two special nieces Donna Cajar and Pamela Butler, four sisters-in law, eight grandchildren, twenty-three great grandchildren, and a host of relatives and friends. Calling hours will be at 10:00-12:00 Friday, June 7 at the Union Baptist Church on 56 8th St. Zanesville, OH with the Funeral services following at 12:00 with Pastor Ernest Dandridge officiating. Burial will be in the Woodlawn Cemetery, Zanesville, with the Hillis, Combs & Nestor Funeral home assisting the family with burial arrangements. Memorial contributions may be made to the Union Baptist Church “God saw the road was getting rough, the hills were harder to climb and whispered unto thee and said, ‘Edley, peace be yours’ Welcome Home.”

The family of Edley H. Clark Martin created this Life Tributes page to make it easy to share your memories.