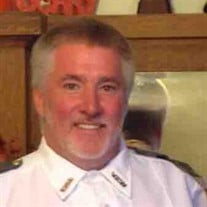 Douglas Eric Robinson, age 55 of Zanesville, died at 5:05 AM, Monday, October 12, 2015 at his home following an extended illness. He was born Saturday, October 8, 1960 in Zanesville the son of the late William Robinson and Margaret (Lemmon) Robinson. He was married on Saturday, July 25, 2015 to Cathy (Pletcher) Robinson who survives. He was a devout member of St. Thomas Aquinas Catholic Church, a life member of VFW Post #1058 and he was an avid Ohio State fan. Douglas honorably served in the United States Army for 10 years and loved his country very much. He was employed at Old Dominion Freight Lines in Columbus as a diesel mechanic until his illness prevented him from working. Also surviving is one son, Cory Stainbrook of Zanesville; two brothers, Bruce Robinson of Westerville, and Jeff Robinson of Crooksville; one sister, Sue Fisher of Zanesville; several nieces and nephews and great nieces and nephews; mother in law, Jean Pletcher of Zanesville; three brothers in law, Larry Pletcher, of Zanesville ;Bill (Vickie) Pletcher of New York and Dave (Polly) Pletcher of New Lexington; one sister in law Barb (Jim) Stoneburner of East Fultonham and his beloved dogs Maddie and Rocky. In addition to his parents he was preceded in death by, two brothers Tim and Craig Robinson and father in law Ralph Pletcher. Friends may call from 2 to 4 PM & 6 to 8 PM on Thursday, October 15, 2015 at the Hillis, Combs & Nestor Funeral Home, 935 Forest Avenue, Zanesville, where a Christian Vigil Service will be held at 7:45 PM. A Mass of Christian Burial will be held 10:00 AM on Friday, October 16, 2015 at St. Thomas Aquinas Catholic Church Zanesville OH with a Dominican Father as celebrant. Burial will conclude in the Zanesville Memorial Park Zanesville where military honors will be conducted by the US Army and VFW Post #1058. To sign the online register book or to send a personal condolence note please visit www.hilliscombsnestor.com.

Douglas Eric Robinson, age 55 of Zanesville, died at 5:05 AM, Monday, October 12, 2015 at his home following an extended illness. He was born Saturday, October 8, 1960 in Zanesville the son of the late William Robinson and Margaret (Lemmon)... View Obituary & Service Information

The family of Douglas E. Robinson created this Life Tributes page to make it easy to share your memories.

Send flowers to the Robinson family.