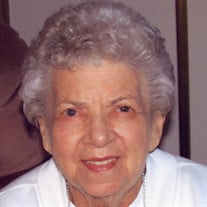 Dorothy Mae Pruden died at 3.54 PM on Friday December 19, 2014 at The Oaks at Northpointe. She was born July 3, 1922 in Belleville, Illinois, a daughter of the late Frank C. and Florence Wuller. Dorothy was a member of the St. Nicholas Catholic Church, Y-City Women’s Club and Good Samaritan Charity Circle. Dorothy lived a full and blessed life. She was a very social person and had a kind word for everyone. She loved spending time with her family and friends. Gatherings at holidays and special family events were full of laughter and joy. She enjoyed playing cards and belonged to several bridge clubs. She especially enjoyed visiting with her relatives across the country. She retired from Good Samaritan Hospital in 1988 after 21 years of service in the Volunteer, Education and Public Relations Departments. After retirement she continued working 9 years as a volunteer. She was preceded in death by Richard W. Pruden, whom she married on April 15, 1944 and passed away on November 27, 1971. In addition to her parents, she was preceded in death by her brothers Frank J Wuller, William N. Wuller, Eugene G. Wuller and Raymond J. Wuller. Surviving are her children Carole (Jim) Sander of Zanesville, Ohio; Dick (Anita) Pruden of Mason, Ohio; Ken (Donna) Pruden of Zanesville, Ohio; Connie (George) Adams of Zanesville, Ohio; Bob (Bev) Pruden of Mason, Ohio and Maggie Pruden of Florence, Kentucky; grandchildren, J.R. (Allison) Pruden; Angie (Michael) Crane; Brian Adams; Jodi (Ron) Moody; Chris (Crystal) Sander and Steph (Seth) Johnson; great-grandchildren, Drew and Kelsie Rath, Kadyn and Cody Moody, Brittney and Cassidy Adams, Hailey and Hayden Sander, Devin and Cameron Crane and Zoey and Willow Johnson. The family extends a very special thank you to the caring staff at The Oaks at Northpointe for the kindness they showed Dorothy during her last years. Memorials may be made to Genesis Hospice 713 Forest Ave, Zanesville, OH 43701 in Dorothy’s name. Visiting hours will be on Monday December 22, 2014 from 2-4 and 6-8 at the Hillis, Combs & Nestor Funeral Home at 935 Forrest Avenue in Zanesville, where a Christian Vigil Service will be held at 7:45. Mass of Christian Burial will be celebrated St. Nicholas Church on Tuesday December 23, 2014 at 10:30 AM. She will be laid to rest at the Mount Olive Cemetery next to her dear husband.

Dorothy Mae Pruden died at 3.54 PM on Friday December 19, 2014 at The Oaks at Northpointe. She was born July 3, 1922 in Belleville, Illinois, a daughter of the late Frank C. and Florence Wuller. Dorothy was a member of the St. Nicholas Catholic... View Obituary & Service Information

The family of Dorothy Pruden created this Life Tributes page to make it easy to share your memories.

Send flowers to the Pruden family.