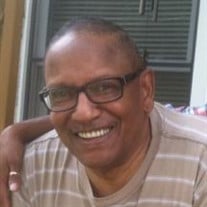 Donald E. "Don" Edwards, 70 of Zanesville, died 11:15 PM, Tuesday, April 7, 2015 at his home following a sudden illness. He was born Saturday, July 8, 1944 in Zanesville, the son of Oscar Edwards and Martha Hortense (Morgan) Edwards. Don retired following many years of service with United Technologies. He loved Mustang Automobiles the faster the better. He was a jack of all trades who enjoyed working with his hands. He was a loving and caring father, grandfather and great grandfather who enjoyed the time he spent with his family. Don is survived by six children: Adonna Edwards of Groveport, Donald Stewart of Columbus, Michele (Mark) Fair of Reynoldsburg, Lewis Wilburn of Roseville, Heather Edwards and Ashley (Chris) Reavley both of Zanesville; nine grandchildren: Tanisha, Chris, Simone, Sloane, Zachary, Mark, II, Nailah, Nevaeh and Destiny ; several great grandchildren; one sister: Martha Norman of Zanesville and many nieces and nephews. In addition to his parents, Don was preceded in death by nine brothers and sisters. Friends may call from 11:00 AM to 1:00 PM Monday, April 13, 2015 at the Hillis, Combs & Nestor Funeral Home, 935 Forest Avenue, Zanesville where Funeral Services will be held at 1:00 PM. Burial will follow in Woodlawn Cemetery. To sign the online register book or to send a personal condolence note please visit www.hilliscombsnestor.com

The family of Donald "Don" E. Edwards created this Life Tributes page to make it easy to share your memories.

Send flowers to the Edwards family.