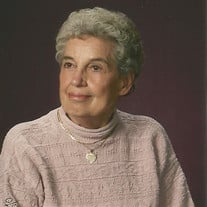 Dolores Marie “Dee” Montgomery, age 92 died peacefully on Friday, September 25, 2015 at her home in Nashport, Ohio following a brief illness. Dolores was born on Friday, January 19, 1923 in Edwardsville, Illinois, the daughter of Robert Melrose and Marie Barbara (Fischer) Landers. Her family moved to Zanesville, Ohio when she was a very young child. She was a 1941 graduate of St. Thomas Catholic High School. On April 15, 1942 Dolores married her high school sweetheart Thomas “Tom” E. Montgomery who preceded her in death on Monday, September 22, 1997. She was a lifetime member of St. Thomas Aquinas Catholic Church. She is survived by two sons, Thomas L. “Rusty” (Nancy Hock) Montgomery and Michael P. (Darla Drake) Montgomery all of Zanesville; seven grandchildren, Shane (Sandy) Montgomery of Akron and their children, Tanner and Trent, Andrea Laubie-Karling of Upper Arlington and her children, Tyler, Amanda, Brett, Jeremy (Lisa) Montgomery of Clintonville and their children, Mya and Ivey, Scott (Angie) Montgomery of Zanesville and his children, Ashley, Kelsie and Brianna, Darrin (Anna) Montgomery of Newark and his children Seth and Austin, Thomas J. “TJ” (Kelly) Montgomery of Columbus and their children, Cameron and Kiya, Tiffany Montgomery (Brent) Wilson of Zanesville and their children, Emma and Aidan. She is also survived by Katie Montgomery Castleberry, widow of grandson Ryan P. Montgomery who preceded her in death on September 10, 2006 and their daughter, Ryan Elizabeth. She is survived by two siblings, brother, Carlos Landers of Zanesville and sister, Barbara Ann Frame of Nashport. Dee Montgomery was a wonderful wife, mother, grand and great-grandmother who delighted to be involved with her son’s children and grandchildren. She had many friends. Throughout the years she was active in numerous organizations including Delta Gamma Pi Sorority, Good Samaritan Charity Circle, and was until recently a beloved volunteer at the St. Thomas Parish Center. After raising her sons, she worked at Terrace IGA for a number of years. Dee was an excellent golfer and enjoyed traveling, playing cards and games with family and friends. She remained a beautiful charming lady until her death. To her family she exemplified the woman spoken of in Proverbs 31: “…For her worth is far above rubies…Her children rise up and call her blessed; Her husband also, and he praises her: “Many daughters have done well, But you excel them all. Charm is deceitful and beauty is passing, but a woman who fears the Lord, she shall be praised.” Friends may call from 2 to 4 PM and 6 to 8 PM on Wednesday, September 30, 2015 at Hillis, Combs & Nestor Funeral Home, 935 Forest Avenue, Zanesville where A Christian vigil service will be held at 7:45PM. Mass of Christian Burial will be celebrated 10:00 AM, Thursday, October 1, 2015, at Saint Thomas Aquinas Catholic Church, 144 N. Fifth Street. Burial will follow in Zanesville Memorial Park Cemetery. In lieu of flowers, donations may be made to Genesis Hospice Care (Morrison House) 713 Forest Avenue, Zanesville, or St. Thomas Catholic Church, 144 North Fifth Street, Zanesville in Dee’s memory To sign the online guestbook or leave a personal note of condolence please visit www.hilliscombsnestor.com

The family of Dolores M. "Dee" Montgomery created this Life Tributes page to make it easy to share your memories.

Send flowers to the Montgomery family.