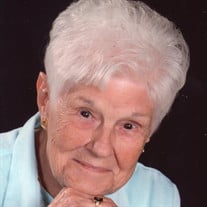 Deloris “Dee” Bronkar of Zanesville, joined her Heavenly Father, Thursday, May 7, 2020, at her home. Deloris was born June 1, 1929, to the late Ernest Richard and Wilda Walters Wells. She retired from Zanesville City Schools and enjoyed playing cards with others and family members. While the Ohio State Buckeyes were a favorite team; her most favorite teams were any team her sons, grandchildren, and great-grandchildren were playing on. She was their biggest fan at any game she attended, and she was able to attend games at age 90. At age 16, her father passed away. She discontinued her formal education to go to work at the SS Kresge 5 &10, to help her older brother Art provide income for a family of 7 children and their mother. This was just the beginning of her passion as a caregiver for many family members and friends over the next 74 years. She is survived by two sons: John (Connie) Pattison of Zanesville, and Mike (Monica) Bronkar of Appleton WI, two sisters: Joann Brown and Sandra (Richard) McBride, both of Zanesville; five grandchildren: John (Sherry) Pattison, Jeff (Heather) Pattison, and Heather (Lance) Miller all of Zanesville, Chris Bronkar of Atlanta, GA, and Andrea Bronkar of Appleton, WI and five great-grandchildren, Kaid, Luke, Logan, Jack and Lincoln and many special nieces and nephews. In addition to her parents she was preceded in death by her husband: Donald Bronkar, who died July 19, 1989, brothers: Billy Wells, Arthur (Doris) Wells, Roydon Wells, and Kenneth (Mary) Wells, and sister: Dorothy Brennan. Donations may be made in Deloris’ honor to the Market Street Baptist Church, 140 N 6th St, Zanesville, OH 43701 or Eastside Community Ministries, 221 Stillwell St., Zanesville, OH 43701. Friends may call from 11AM to 1PM, Tuesday, May 12, 2020, at the Hillis, Combs & Nestor Funeral Home, 935 Forest Avenue, Zanesville. A funeral service will be held 1PM on Tuesday at the funeral home with Rev. Howard Thompson officiating. Due to current medical conditions, social distancing and building occupancy will be maintained and guest are asked to wear masks. Burial will conclude in the Zanesville Memorial Park. A celebration of life will be held at a later date. To sign the online guest book please visit www.hilliscombsnestor.com.

Deloris &#8220;Dee&#8221; Bronkar of Zanesville, joined her Heavenly Father, Thursday, May 7, 2020, at her home. Deloris was born June 1, 1929, to the late Ernest Richard and Wilda Walters Wells. She retired from Zanesville City Schools and... View Obituary & Service Information

The family of Deloris "Dee" Bronkar created this Life Tributes page to make it easy to share your memories.

Send flowers to the Bronkar family.