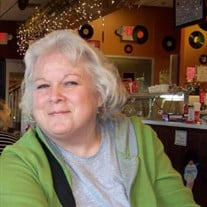 Debra L. "Debbie" West, 60 of Cambridge, died 1:44 AM, Sunday, May 22, 2016 at Genesis Morrison House Hospice following a short illness. She was born Sunday, January 22, 1956 in Cambridge, the daughter of Howard Rex King and Mary Elizabeth (Bishard) King. She married Kenneth “Rick” West on Saturday, May 27, 1995 and was a member of North Terrace Church of Christ. Debbie was a loan supervisor with Century National Bank and retired from Guernsey Muskingum Electric. She loved the outdoors and camping with family. She was a flower and vegetable gardener and greatly enjoyed being on her farm. She was a loving and caring wife, mother and grandmother who cherished the time she spent with them. In addition to her husband, Debbie is survived by four step-children: Michele (Todd) Lawyer, Melody Butts, Tammy (John) Drake and Ryan West all of Zanesville; ten step-grandchildren; one great grandchild; four siblings: Ernest (Donna) King, Susan King and Dennis (Laura) King all of Cambridge and Frank (Jeanette) King of West Virginia; several nieces and nephews including a special niece: Joy Broseus of Newark and her bff: Cathy Jo Hodgson of New Concord. In addition to her parents, Debbie was preceded in death by two sisters: Donna Talbert and Patricia McElroy and two brothers: Thomas King and infant John King. A Celebration of Life Gathering to Honor Debbie’s Life will be held, 5:00 PM, Saturday, June 25, 2016 at the family farm. In lieu of flowers, an opportunity to make memorial contributions in Debbie’s memory will be available during the service for Guernsey County Cancer Society or Morrison House Hospice. The Hillis, Combs & Nestor Funeral Home, 935 Forest Avenue, Zanesville, is honored to care for the West Family. To sign the online guestbook or leave a personal note of condolence please visit www.hilliscombsnestor.com.

The family of Debra "Debbie" L. West created this Life Tributes page to make it easy to share your memories.

Send flowers to the West family.