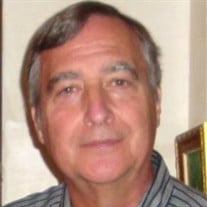 David “Dave” T. Barclay, 71, went to join his place among the tenors in God’s heavenly choir on August 25, 2015 after fighting a long illness over the past 8 years. Dave was the son of Ronald and Mary (Edwards) Barclay and was born June 17, 1944 in Madison, Indiana while his father was stationed there during World War II. While he was born a Hoosier, he was a lifelong resident and longtime business owner in Zanesville, Ohio and was always a Buckeye. He was a graduate of Zanesville High School and Ohio Northern University where he obtained his Pharmacy degree. Dave was a registered pharmacist who owned Ellis Pharmacy on Maysville Pike from 1971 until he sold it in 1994 to Rite Aid. An advocate for his clients, Dave provided them not only with their medication but was one of the last neighborhood pharmacists who was a friend and advisor to all of his customers. After he sold his pharmacy, he often talked about how he missed the close personal interactions that he had with his customers even though many of them followed him when he changed locations until he retired in 2005. Dave was a lifelong and active member of St. Luke Lutheran Church of Zanesville where he was a member of the Congregational Counsel in various roles most of his adult life. Before his illness he was a member of the Choir, handbell choir and volunteered whenever the church needed assistance during their projects. He also was able to touch the lives of many young people as the longtime Luther League youth group advisor and saw those children turn into successful adults. He was very proud to have been part of their lives and was a role model to them as to how to lead a Christian life. Prior to his illness, Dave was also a long standing member of the Y-City Barbershop Chorus where he sang tenor and also was a member of several different quartets. Often, you would find Dave sitting at his beloved piano playing and singing anything he could find. Dave is survived by his wife of 45 years Mary Jane (Mirgon) Barclay of the home, Adam Barclay and his wife Kathy of Nashport, two granddaughters, Allyson and Madison Barclay who were the light of his life and the source of much happiness, his caregiver and close friend Donna Dalton, and his furry companion Alfie who was never far from his side. He is also survived by his siblings Richard Barclay of Columbus, Jeannie (Greg) Little and Bruce (Tere) Barclay both of Zanesville, many friends and nephews and nieces who were all special to him. He was preceded in Death by his parents and his brother-in-law Thomas L. Mirgon. Hillis Combs and Nestor is entrusted with his final arrangements and calling hours will be observed on Friday August 28, 2015 from 4pm to 8pm at the funeral home and funeral services will be held at St. Luke Lutheran Church at 1339 Pine Street, Zanesville, Ohio on August 29, 2015 at 10:00 am with an opportunity to pay final respects beginning at 9:00am. Following the services, he will be interred in Zanesville Memorial Park. Pastor Marjorie McDaniel-Burnett will officiate. In lieu of flowers, the family requests that donations be made to the St. Luke Lutheran Church Outreach Fund or Morrison Hospice House so that Dave’s life can continue to reach out to people in Zanesville who are in need.

The family of David T. Barclay created this Life Tributes page to make it easy to share your memories.

Send flowers to the Barclay family.