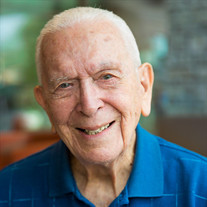 Charles Paynter was born on March 4, 1918, in Columbus, Ohio, to John and Mary Paynter. His father, John Paynter, was superintendent of schools in Coolville, Butler and Mt, Blanchard, Ohio. Charles attended first and second grades in Coolville and third through twelfth grades in Butler. While at Butler he played football, basketball and baseball, participated in school plays, and played the piano at school functions. He spent summers on his grandfather Andrew Dye’s farm near Harrisonville, Ohio, where he helped plant and harvest crops, feed and care for livestock and poultry, and perform odd jobs around the farm. Charles graduated from the Ohio State University in 1940 with a BS in Electrical Engineering, and accepted a position with the Ohio Power Company as an electrical engineer. In 1941 he was drafted into the Army and served until 1945, when World War two ended. While in the Army he was stationed at Fort Sill, Okla., Aberdeen, Md., and Camp Davis N.C., and served overseas in England, France and Germany. He was trained to operate, maintain and repair computers, electronic and hydraulic systems associated with 90 mm and 120mm antiaircraft guns. After the war Charles resumed his job at the Ohio Power Company in Newark, Ohio, as a substation engineer. Charles met Loretta Schumacher at the Newark YMCA while taking square dance lessons, and they were married in 1958. This was the best decision either had ever made. Charles was transferred to the Ohio Power Company’s newly formed Zanesville Division as division planning supervisor in 1964. Charles was affiliated with engineering societies in the Newark and Zanesville areas and served several terms as president of the Ohio Society of Professional Engineers and the American Institute of Electrical and Electronic Engineers in the Zanesville area. He became division substation supervisor in 1972, a position he held until retirement in 1983. Charles had many hobbies, including woodworking, computers, music, stereo, photography and tennis, and he enjoyed golfing with seniors at the Green Valley Golf Course. His biggest joy was spending time with his children and grandchildren. He is survived by his daughters; Donna Zaworski of Columbus, Ohio, and Nancy Paynter of Richmond Calif., son; Billy Paynter, Zanesville, Ohio and two grandchildren; Megan and Zachary Zaworski of Columbus, Ohio. His wife, Loretta died on February 11, 2016. Friends may call from 5:00 to 8:00, Wednesday, April 19, 2017, at the Hillis, Combs & Nestor Funeral Home, 935 Forest Avenue, Zanesville, where a Christian Vigil will be held at 7:45 PM. Mass of Christian Burial will be celebrated 10:00 AM, Thursday, April 20, 2017 at St. Thomas Aquinas Catholic Church, 144 North Fifth Street, Zanesville, with a Dominican Father as celebrant. Burial will follow in Mt. Olive Cemetery with Full Military Honors.

The family of Charles W. Paynter created this Life Tributes page to make it easy to share your memories.

Send flowers to the Paynter family.