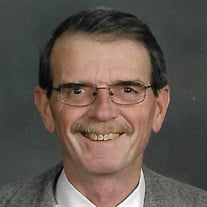 Charles J. "Jeff" Booth, 68 of Zanesville, died peacefully 3:13 AM, Saturday, June 10, 2017, at Genesis Morrison House Hospice. He was born Sunday, December 5, 1948, in Columbus, the son of Harrison E. "Jim" Booth and Lucille (Hughes) Booth. He married Gretchen (Quinn) Booth on Saturday, September 5, 1992, and was a member of St. Thomas Aquinas Catholic Church. Jeff served his country as a veteran of the United States Army, and was a Nuclear Medicine Technologist with Bethesda Hospital for many years. Following his career in the medical field, Jeff became a Real Estate Broker and operated his own brokerage company, Great Eastern Real Estate. Jeff was a firearm enthusiast, true to his life-long fascination with old western TV shows. He was often be seen about town a very dapper black cowboy hat. He was an animal lover especially his dogs and cats. Most of all, Jeff had a great sense of humor and was a huge practical joker. He, along with this cousin Gene, were legendary in their family for the jokes, pranks and antics initiated and are still being reminisced to this day. One of his favorite pranks was listing in the wedding announcement that he and Gretchen would be embarking on a world cruise for their honeymoon, true to his word; he and Gretchen visited all the countries in the AmericaFlora Exhibit, the International Floral and Garden Exposition in 1992, featuring over 25 countries. In addition to his mother: Lucille Booth, Jeff is survived by his wife: Gretchen Booth; four children: Michael (Dawn) Booth of Bradford Woods, PA, Charlette (James) Glines, Charlene (Rick) Richardson & Collette (Marty) Bickford all of Washington State: several grandchildren including: Anthony, Rachel & Joey Booth; one sister: Pam (Bruce) Shrimplin of Warsaw, OH and his mother-in-law: Margaret Quinn of Zanesville. In addition to his father, Jeff was preceded in death by his father-in-law: Tom Quinn Friends may call Thursday, June 15, 2017, from 5:00 to 8:00 PM, at the Hillis, Combs & Nestor Funeral Home, 935 Forest Avenue, Zanesville, where a Christian Vigil will be held at 7:45 PM. Mass of Christian Burial will be celebrated 10:00 AM, Friday, June 16, 2017, at St. Thomas Aquinas Catholic Church, 144 North Forth Fifth Street, Zanesville, with Fr. Peter Fagen, O.P. as celebrant. Burial will follow in Mt. Calvary Cemetery with the United States Army, VFW Post 1058 and American Legion Post 29 conducting full military honors. Memorial contributions may be made to Genesis Morrison House Hospice, 713 Forest Avenue, Zanesville, Ohio 43701 in Jeff’s memory. To sign the online register book or to send a personal condolence note please visit www.hilliscombsnestor.com

The family of Charles "Jeff" J. Booth created this Life Tributes page to make it easy to share your memories.

Send flowers to the Booth family.