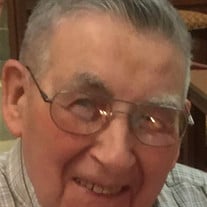 Charles E. "Chuck" Durant, 90 years old and a resident of Zanesville, died 5:37 AM, Friday, August 5, 2016 at Genesis Hospital following a brief illness. He was born October 27, 1925 in Zanesville, to Edward P. and Charlotte J. (Bridwell) Durant. He married Jeanette A. (Baker) Durant on Saturday, May 13, 1950 and was a member of St. Nicholas Catholic Church. After graduation from Philo High School, Chuck served his country during WW II, with 2nd Battalion, Company E, 346th Infantry Regiment, 87th ‘Golden Acorn’ Division of the United States Army in the European Theatre. The 87th was a green division that saw its first action in southern Germany. He was among the thousands of GIs who rode on the beds and running boards of tarp covered trucks in that infamously bitter, early winter, covering a circuitous 300+ mile trip to the Ardennes Forest just before the beginning of the Battle of the Bulge. Thrown into action without rest, the Golden Acorn played a major role in severing the German supply line, taking pressure off the better known101st Airborne Division that was pinned down in Bastogne. Chuck rehabbed frozen feet in England and rejoined his outfit weeks later, recognizing just a handful of guys amongst the many replacements. On the way to the Czech border where they ended the war, he participated in the liberation of a Nazi concentration camp. Chuck was the recipient of a Bronze Star, was promoted from Private to Sergeant (Squad Leader) in the field and honorably discharged after V-J Day as Staff Sergeant, having been in charge of an M.P. Platoon, with the 1209th Service Command Unit at Camp Pine, New York. He grew up on a small, Percheron horse powered farm on Lawhead Lane. As a boy, he was fascinated with what the electricians did while wiring the house. Decades later he would laugh and wonder how he didn’t electrocute himself conducting his ‘experiments’ in the damp farmhouse basement! He played ball and test drove midget cars for a man up the lane who assembled them from kits. He worked for area potato growers, earning enough money to load generators and lights onto his prized bicycle. He fessed up to a Beggars’ Night escapade, wherein a hay wagon was hauled piece by piece up a ladder for reassembly on the schoolhouse roof. He took shop classes at PHS and intended to be an auto mechanic. But after the war, an uncle who was a plumber needed help. Chuck began cutting and threading pipe, reading measurements scribbled on scrap lumber thrown out the window by his uncle. His experience ran the gamut from plunging apartment commodes to fabricating his section of oil refinery piping, reading from blue prints. The last several years of his career, he was co-owner and operator of Durant Plumbing; wife Jane serving as the CFO. He was a Master Plumber and the oldest living member of Plumbers Union Local 495. He volunteered at Rosecrans High School and the St. Nicholas Festival for many years. Good with his hands, Chuck taught himself to wire a house, lay block, weld and do carpentry work, in addition to keeping cars and trucks running. His garage was a fascinating place, he loved to fabricate problem solvers and gizmos, and his grandchildren knew that Papa was the best fixer! He loved to tease and be teased and his wit was sharp as ever, to the very end. He was a loving and caring husband, father, grandfather and great-grandfather. Our humble, unassuming hero is gone, but we have such great memories, like his love of pumpkin pie and whatever that canned cranberry stuff is. A treasured part of family lore - Mr. Romantic proposing to Mom, while driving across the long gone 5th street bridge: “Open the glove box; I have something in there for you!” The engagement ring box likely sat atop pliers, wrenches, screw drivers, a box of fuses and friction tape. Chuck is survived by six children and their spouses: Charles “Chuck” Jr. & Jane Durant, of Austin, TX, Stephen & Patricia Durant of Carmichael, CA., Diane & Tom Rotunda of Copley, OH, Carol & Robert Holtzclaw of East Hartford, CT, Mary Joan & Jeff Lewis of Granville, OH and Pat & Renee Durant of Zanesville; nine grandchildren and their spouses: Jennah Durant & Gary Maxwell, Ryan & Amber Durant, Kyle Durant, Erik Durant, Madeline Rotunda, Jared Lewis, Alexandra Lewis, Olivia Durant and Ian Durant; one step-grandson: Rich & Jessica Holtzclaw ; two great granddaughters: Danielle & Emery Durant; two sisters: Patricia Baldwin of Kettering, OH and Deloris Bender of Zanesville. His children will always be grateful to the staff of Primrose Retirement Community for the loving care they provided to Mom and Dad. In addition to his parents, Chuck was preceded in death by his wife of over 65 years, Jane Durant; an infant son, Mark Fredrick Durant and his brother, James Durant. Friends may call from 4:00 to 8:00 PM, Thursday, August 11, 2016 at The Hillis, Combs & Nestor Funeral Home, 935 Forest Avenue, Zanesville where a Christian Vigil will be held at 7:45 PM. Mass of Christian Burial will be Celebrated 10:30 AM Friday, August 12, at St. Nicholas Catholic Church, 935 East Main Street, Zanesville with Fr. Martin J. Ralko as Celebrant. Chuck will be laid to rest beside his beloved wife Jane in Mt. Olive Cemetery with VFW Post 1058 and The United States Army conducting Full Military Honors. To sign the online register book or to send a personal condolence note please visit www.hilliscombsnestor.com

The family of Charles "Chuck" E. Durant Sr. created this Life Tributes page to make it easy to share your memories.

Send flowers to the Durant family.