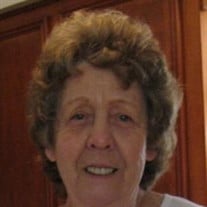 Charlene Wilson, 79, of Nacogdoches, TX, formerly of Zanesville, passed away Friday, January 18, 2019, in Nacogdoches. She was born March 5, 1939, in Middleport, Ohio, the daughter of Mack and Thelma Hunnel Hawkins. As a young girl, Charlene lived in the Putnam Neighborhood and was proud to call herself a “Putnam Hunkie.” She was employed by the National Cash Register Company for many years. Charlene met and married the love of her life, Thomas Wilson on May 23, 1969. Together, they raised 5 children as one family. Some of their happiest memories were spent at Lake Isabelle and stopping for “hot chips” along the way. They watched as their children grew and added to the family their beloved grandchildren. In 1987, Tom’s job took them to Nacogdoches, Texas and Charlene continued to send her love across the states to her children and grandchildren. Charlene loved sewing, bowling and golfing. She would go to almost every yard sale she saw to go “Junkin”. She had a passion for the outdoors and wildlife and was often found watching hummingbirds or working in the yard. Charlene will be remembered for her simple, thrifty life, which was filled with compassion and love. Charlene is survived by her husband and best friend of almost fifty years: Thomas A Wilson of Nacogdoches, TX, three sons: Thomas “Butch” (Kris) Wilson of Chicago, IL, Timothy Wilson of Nacogdoches, TX & Steve (Mary) Wilson of Branchport, NY; two daughters: Angela (Rick) Ferrell of Zanesville, & Cindy Wilson & fiancé’ Butch Rhoads of Martinsburg; grandchildren: Lucas, Ryan & Tyler Wilson, Joe Wilson, Celeste & Scott Moles, Julia Wilson, Stephenie Wilson, Ricky ( Meghan Ferrell), Brett (Shelly Swartz) Ferrell, Brandon Heather Baker) Ferrell, Heath (Adina) Girton and Joshua (Annie Girton); fourteen great-grandchildren; one brother: Roy (Judy) Hawkins of Zanesville; and two sisters: Flora Hutcheson & Laura (Estes) Jenkins both of Zanesville. In addition to her parents, Charlene was preceded in death by one brother: Jake Hawkins; one sister: Maxine Bryan; two brothers-in-law: Bill Wilson & Norman Hutcheson and her father & mother-in-law: Marshall & Marcia Wilson. The family will receive friends and relatives, Monday, January 28, 2019, from 11:00 AM to 1:00 PM, at the Hillis, Combs & Nestor Funeral Home, 935 Forest Avenue, Zanesville, where funeral services will follow at 1:00 PM, with Pastor Andrew Wilson officiating. Charlene will be laid to rest in Zanesville Memorial Park. To sign the online guestbook or leave a personal note of condolence please visit www.hilliscombsnestor.com

Charlene Wilson, 79, of Nacogdoches, TX, formerly of Zanesville, passed away Friday, January 18, 2019, in Nacogdoches. She was born March 5, 1939, in Middleport, Ohio, the daughter of Mack and Thelma Hunnel Hawkins. As a young girl, Charlene... View Obituary & Service Information

The family of Charlene Wilson created this Life Tributes page to make it easy to share your memories.

Send flowers to the Wilson family.