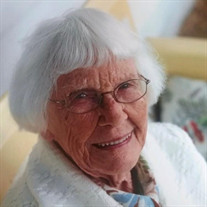 Catherine Marie (Kate) Rowan Musselman died September 18, 2021 at her home of 75 years on Musselman Drive with her family, grateful for the perpetual care of her children, their spouses and grandchildren this past year. She was born in Athens, the daughter of Elizabeth Kathryn “Besse” Barrett and Anthony Francis Rowan October 7, 1918. Catherine’s mother died of the influenza in February 1919. Since her father was unable to care for her, he entrusted her care to the Franciscan Sisters at Saint Anne’s orphanage until 1923 when she moved to Saint Aloysius boarding school in New Lexington. In 1929 Catherine moved to Zanesville to live with her father and stepmother, Mary (Riley) Rowan. She graduated from St. Thomas high school in 1936 and attended Meredith Business College. She was employed at Zanesville Provision Company as a stenographer until she married Michael Raymond Musselman in 1938. After coming to know Mike’s family, loving parents and 12 siblings, and her lonely childhood, she and Mike looked forward to a large family. Catherine always felt blessed to be with family. She was a compassionate listener to their joys or hardships and rejoiced in their accomplishments. A loving dedicated wife to Mike, she cared for him in their home through his years with Alzheimer’s. Catherine was an active member of the community, especially after she and Mike had raised their 12 children. She was an active parishioner of Saint Thomas Parish; a member of the Third Order of Dominic, Altar Rosary Society, 39 years with Saint Thomas Quilters, an avid supporter of Muskingum Valley Right to Life, visitor to the homebound and a second-grade catechist for several years. Catherine also enjoyed her time as activities volunteer at the Muskingum County Home. She was also a member of the NAMI (National Alliance of Mental Illness) Six Counties. Catherine is survived by her children; four daughters: Kathleen (Gary) Copp of Carson City, Michigan; Mary Ann (Richard) Bigger of Sherburne, New York; Alberta (Norman) Hatmaker of Glenelg, Maryland; Jane (Robert) Awtrey of Leesburg Virginia; six sons: Michael (Corinne), Patrick (Kaye) and Daniel (Edie) of Zanesville; Timothy of Bowling Green; Vincent (Lori) of Canal Winchester; Richard (Deborah) of Yorktown, Virginia; daughters-in-law: Mella Musselman and Kathleen Musselman; 44 grandchildren, 93 great grandchildren and 12 great great grandchildren. In addition to her parents, she was preceded in death by Mike, her husband of 55 years, sons Camillus and Thomas, granddaughter Andrea Musselman Scott and great grandsons Sam Osowski, and Roark Defenderfer. Viewing will be held at Hillis Combs & Nestor Funeral Home, 935 Forest Avenue, Zanesville, OH, on Tuesday, September 21, 2021, from 2:00 – 8:00PM. There will be a prayer service following calling hours. A Funeral Mass will be held at St. Nicholas Catholic Church, 925 E Main Street, Zanesville, OH, on Wednesday, September 22, 2021, at 10:30 a.m. with Fr. Jan P. Sullivan as celebrant. Burial will follow mass at Mount Calvary Cemetery, Zanesville. To sign the online guest book or leave an online condolence, please visit www.hilliscombsnestor.com.

Catherine Marie (Kate) Rowan Musselman died September 18, 2021 at her home of 75 years on Musselman Drive with her family, grateful for the perpetual care of her children, their spouses and grandchildren this past year. She was born in Athens,... View Obituary & Service Information

The family of Catherine Marie (Kate) Rowan Musselman created this Life Tributes page to make it easy to share your memories.

Send flowers to the Musselman family.