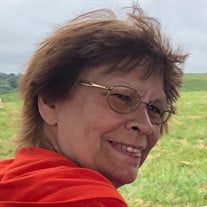 Catherine “Cathy” (Dinan) Mallett passed away Monday, July 8, 2019, surrounded by her family following a brief illness. Cathy was born September 19, 1952, in Zanesville the daughter of Thomas R. and Hilda V. (Granstaff) Dinan. Cathy was raised in Zanesville but spent most of her adult life in Reading, Ohio, near Cincinnati, before recently moving back home. Cathy worked in the banking business most of her life and was employed with Fifth Third Bank in Reading, for over 40 years until her retirement in 2014. Cathy was a lover of all animals, and following her retirement she volunteered at Turner Farms in Cincinnati, looking after goats, pigs, horses and many other four legged friends. Cathy also had a keen sense of money management and volunteered her services counting money for many years at the annual St. Rita’s festival as well as recently overseeing financial operations at the “Dinan-Firestone” parking enterprise in Akron. Above all else, Cathy was a devoted mother to her son and family always being her number one priority. Before moving back to Zanesville, she spent many hours driving back and forth from Reading, to help care for her sister as she battled her own illness. She will be greatly missed by her family. Cathy is survived by her son: Matthew Mallett; brothers: Thomas Sherwood “Sherry” (Peggy) Dinan, John (Kathleen) Dinan, Pete (Brenda) Dinan; her sister: Christine (Bill) Merry; a sister-in-law: Estelle Dinan; a host of close knit cousins and numerous nieces, nephews, great nieces and great nephews. In addition to her parents, she was preceded in death by her brothers: David and Michael Dinan; her aunt: Catherine “Sissy” Dinan; two special angels, great nieces: Kylee Dinan and Emily Buffkin. Mass of Christian Burial will be celebrated 10:30 AM, Friday, July 12, 2019, at St. Mary’s Catholic Church at Mattingly Settlement with Fr. Donald Franks as celebrant. The family will receive friends and relatives one hour prior to mass from 9:30 AM till time of service at the church. Burial will follow in Mt. Calvary Cemetery in Zanesville. In lieu of flowers, memorial contributions may be made to the Cincinnati ASPCA, Attn: Development Department, 11900 Conrey Road, Cincinnati, OH 45249, St. Mary’s Catholic Church, PO Box 107, Dresden, OH 43821 or Turner Farms, 7400 Given Road, Cincinnati, OH 45243 in Cathy’s memory. To sign the online guestbook or leave a personal note of condolence please visit www.hilliscombsnestor.com

The family of Catherine "Cathy" (Dinan) Mallett created this Life Tributes page to make it easy to share your memories.