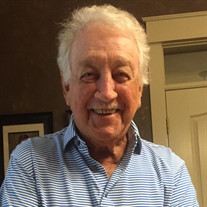 Carroll David Swope, age 93, of Zanesville, died Friday, July 10, 2020, at Genesis Hospital in Zanesville. He was born Friday, December 24, 1926, in Dresden, OH, the son of H. Kenneth Swope and Claribel (West) Swope and married to Tami (Summers) Swope for 44 years. Carroll graduated from Jefferson High School, Ohio State University, and many insurance schools. He was a WW II Veteran, serving our country in the United States Navy. In 1953, he opened Swope Insurance Agency and merged with Rankin and Rankin Insurance where he retired in 1995. He volunteered and served his community through Jaycee’s (constructing the present day golf course), Red Cross, A.C.S., Rotary, Pioneer School Zanesville Clay Center, and Y-Bridge Arts Festival. Carroll received numerous accolades for his dedication to his favorite charities. Carroll’s passion was his family, sports, music, and was still an active golfer. In addition to his wife he is survived by five children; David (Christine) Swope, Dana (Cindi) Swope, Abbey (Chuck) Morrison, Summer (Patrick) McGovern, and Chris (Stephanie) Roessler; twelve grandchildren, Jill (Chad) Leake, Blair Swope, Dana Christine Swope, Camden, Braelyn, Keigen, and Mayzie McGovern, Sophia, Chris and Nicholas Roessler, Cole (Katie) Morrison, and Bailey Morrison; two great grandchildren, Hannah Leake and Cameron Morrison; two brothers, Paul (Donna)Swope and Dale(Cynthia) Swope; sisters-in-law, Marilyn and Shirley Swope, Kim (Tom) Forrestal; brothers-in-law, Scott (Joanne) Summers and Casey (Sue) Summers, plus many loving nieces and nephews. Carroll was preceded in death by his parents and two brothers; Kenneth and Gerald Swope. Due to current health concerns and Covid-19, there will be no services. A celebration of life will be held at a later date. Carroll was fortunate enough to be included in one of the Honor Flights to Washington DC in 2016 to commemorate his WW II service. It was such a meaningful event to him, so in lieu of flowers, donations can be made to Honor Flight Columbus, PO Box 12036 Columbus, OH. 43212-0036. As another option, donations can also be made to the Westview Community Park Fund in care of Muskingum Valley Park Society , 1720 Euclid Ave., Zanesville, OH 43701 which will bear a plaque/bench in his memory. Please be sure to include Carroll Swope on any donation checks written to either place.

The family of Carroll David Swope created this Life Tributes page to make it easy to share your memories.

Send flowers to the Swope family.