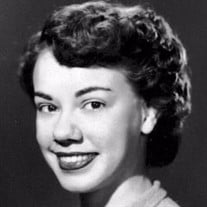 Betty Sue Colopy, born Elizabeth Susan Williams, in Pittsburgh, PA in 1926, married in 1952 to Don R. Colopy (died 2000); died at 2:28 a.m., Saturday, April 15, 2017 at Willow Haven Care Center in Zanesville, Ohio. She was 90 years old. Mrs. Colopy had been in declining health for many years, and in January, grew progressively worse. She will be remembered as a loving wife, a wonderfully loving and compassionate mother, sister, aunt, and a true friend; she made it all look so easy. The eldest of four children, Betty’s spirit was forever young and optimistic. She was a woman whose sense of adventure, style and talent, took her along with her sisters Josette and Carol, and their brother Rodney, on dozens of memorable adventures at their grandparents farm in Pennsville, OH, through their idyllic childhood in Crooksville, and their teen years in Zanesville, where Betty, Josette and Carol, were forever acknowledged by their St. Thomas High School classmates as, ‘the Williams sisters’. A graduate of St. Thomas High School Class of 1944, Betty attended Muskingum College. In the late 1940’s, she accepted a job with the U.S. Department of the Navy, in Washington, D.C., where she was eventually joined by her sisters, Josette and Carol. In January, 1949, the Williams sisters were selected to represent the state of Ohio, on the State float in the Truman Inaugural Parade. In 1950, she was set to work at the American Embassy in Paris, but having met Don Colopy on a blind date in Zanesville, changed her plans – marrying him April 18, 1952, and became a member of St. Nicholas Parish and Church. As a volunteer Room Mother at Westview Elementary School; where her children were enrolled, Betty effortlessly baked dozens of cookies and cakes for innumerable field trips, and volunteered as a driver along-side the other mothers. She donated her baked goods to the St. Nicholas Church Festivals, and to numerous local community and political events. She organized endless summer days for her children at Northside Beach, summer barbeques, and prepared fantastically memorable family holiday and birthday celebrations; establishing traditions that to this day, are difficult to match. She was a member of the Zanesville Art Institute’s, Beaux Arts Committee, where along with her fellow committee members and friends, planned and created award winning costumes ranging from the many characters in Peter Pan, Snow White and Prince Valiant, up to a life-sized, three-tiered, lighted, birthday cake costume. Always an advocate for equal rights, and an active Democrat, she volunteered at the Polls, every election-day, eventually becoming the Zanesville Clerk of Council. She was a founding member of the Muskingum County Women’s Democrat Club, established by her good friend Shirley Corbett in 1986, and in 1987, ran as the Democrat candidate for Mayor of Zanesville; having to withdraw due to a stroke. “Mom was a woman who never thought anything mattered more than her husband, her children, family and friends. Her faith was not dependent on whether or not situations or events would resolve in her favor. She saw life as a gift, and believed that in God, all things are possible -- that life on this earth is truly a gift from God --- one that should be cherished no matter how simple or difficult the challenge. She not only accepted that challenge but she embraced it gladly and weathered its many storms with a quiet dignity and a strong faith - that was ‘our mother’. Her grace and dignity will be missed”. Mrs. Colopy is survived by her sons, Mark R. and wife, Janell, Matthew J.; a daughter, Ann Michele; two sisters, Josette Davison, Carol Lee Warren; a brother, Rodney Williams; and close family friends, Shirley Corbett and Dee Corbett Ihlenfield, and her many nieces and nephews in Florida, Kentucky, New Jersey, Ohio, and South Carolina. A Funeral Mass will be celebrated at 10:00 a.m. Monday, April 17, at St Nicholas Catholic Church. The graveside Rite of Committal will be celebrated later this summer at Mt. Olive Cemetery, in Zanesville.

The family of Betty Sue Colopy created this Life Tributes page to make it easy to share your memories.

Send flowers to the Colopy family.