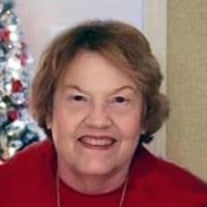 Barbara Wolfe, age 76 of Chagrin Falls, formerly of Zanesville, died 7:22 AM, Sunday, December 27, 2020, at Hill Crest Hospital in Cleveland, OH. She was born Thursday, November 16, 1944, in Morgantown, WV, the daughter of Raymond Bowman and Mary (White) Bowman. Barbara was married July 8, 1967, to Allen Wolfe, who preceded her in death on September 27, 2006. Barbara was a 1962 graduate of Rosecrans High School and was a homemaker for many years. When her children were grown, she worked in retail for Elder Beerman Department Store and in the administrative offices of Ohio University-Zanesville. She volunteered for St. Thomas Aquinas School, Bishop Rosecrans High School, and the Charity Circle at Good Samaritan Medical Center for many years. She was also a past member of the Muskingum County Women’s Republican Club and a current member of the Red Hot Mamas organization in Chagrin Falls, Ohio. She is survived by two daughters; Mary Beth (Dan) Lindner of Chagrin Falls, OH, and Amy (Chad) Peoples of Paducah, KY; one son, Bill (Jodi) Wolfe of Zanesville; five grandchildren, Chad, Alli, Jake, Liam, and Grace; two brothers-in-law John Wolfe of Hilliard, OH, Paul (Mary Ann) Wolfe of Zanesville, and Frank Aquino of Fernandina Beach, FL; and one sister-in-law, Bridget (Bill) Weber of Seattle, WA, and several nieces and nephews. In addition to her parents and husband Barbara was preceded in death by her sister-in-law Katie Aquino. Barbara was a devoted and loving mother, Nana, aunt, sister-in-law, and friend. She enjoyed hosting holiday celebrations for her extended family, traveling, crafting, decorating for holidays, and spoiling her grandchildren. She spent countless hours creating special birthday and Christmas gifts for her grandchildren that they will always cherish. She will be dearly missed by her loved ones. In lieu of flowers, donations may be made to the charity of your choice at Legacy Donations in memory of Barbara. A private family service at the funeral home will take place. Due to ongoing maintenance at St. Thomas Aquinas Catholic Church a Funeral Mass will be held 10:30 AM on Saturday, January 9, 2021 at St. Nichols Catholic Church, 925 Main Street, Zanesville, with Fr. Jan C.P. Sullivan as celebrant. Burial will conclude in the Mount Olive Cemetery, Zanesville. To sign the online register book or to send a personal condolence note please visit www.hilliscombsnestor.com.

The family of Barbara Wolfe created this Life Tributes page to make it easy to share your memories.