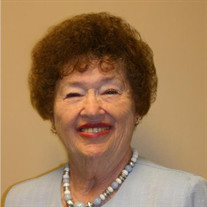 Barbara A. Cherrington Mendelson, 83 of Zanesville, died 12:05 AM, Thursday, February 14, 2019, at Genesis Hospital following a brief illness. She was born March 19, 1935, in Zanesville, the daughter of Paul Cherrington and Fern (Glaub) Cherrington. She married Warren J. Mendelson in 1975, who preceded her in death, and she was a member of St. Nicholas Catholic Church. Barb was very active and dedicated to both St. Nicholas and St. Thomas churches. Barb was a graduate of the Good Samaritan School of Nursing, and received a Bachelor’s Degree in Nursing, a Master’s Degrees in Nursing and a Master’s Degree in Art History, all from Ohio University. But most of all, Barb was known for her care, understanding compassion and excellence as a registered nurse. She was an integral component advancing the development of local healthcare. Barb was instrumental in the development of the first Critical Care Unit in Zanesville. She has been a respected nursing leader both in the acute care and the academic settings. She has dedicated her life to her family, her nursing, and her community, and through example has clearly demonstrated the powerful influence of women. Even into her retirement from Good Samaritan Hospital, Barb continued to influence young nursing students in teaching and training of the next generation of healthcare professionals. You could often find her in the halls of local nursing homes with her students in tow, eagerly leaning from her advice and vast experience. Barb also quietly worked behind the scenes in many organizations giving back to the community she loved and served. She willingly and cheerfully was dedicated to her community to improve the lives of others. 2nd Corinthians 9:7 says “Each of you should give what you have decided in your heart to give, not reluctantly or under compulsion, for God loves a cheerful giver” and Barb exemplified that in her daily life. She was involved in Eastside Community Ministry, The Alumni Association of Good Samaritan Nurses, Christ's Table, Salvation Army, United Way, and many others. Barb received several awards and honors throughout her long career. Two that were very special to her were the Good Samaritan "Bob and Delores Hope" award in 1997 and the Muskingum County Women of Achievement "Josephine Phillips Health Care" award in 2008. Barb is survived by her daughter: Jennifer M. Mendelson of Cincinnati; two sisters: Dixie Kreissl of Cincinnati and Polly (Dick) Brown of Zanesville; two sisters-in-law: Susan Cherrington of North Carolina and Florida and Lydia Mendelson of Metairie LA; one brother-in-law: Ronald (Myrna) Mendelson of Metairie, LA; eleven nieces; five nephews and several great nieces and nephews. In addition to her parents, Barb was preceded in death by her husband: Warren J. Mendelson; two brothers: Robert Cherrington and Paul (Dolly) Cherrington and several brothers and sisters-in-law: Stanley (Frances) Mendelson, Jr., Harold Mendelson, Allen Mendelson, Howard Mendelson, Ellen (Norman) Tooley, and Roy Kreissl. Friends may call from 4:00 to 8:00 PM, Thursday, February 21, 2019, at the Hillis, Combs & Nestor Funeral Home, 935 Forest Avenue, Zanesville, where a Christian Vigil will be held at 7:45 PM. Mass of Christian Burial will be celebrated 10:30 AM, Friday February 22, 2019, at St. Nicholas Catholic Church, 955 East Main Street, with Fr. Martin J. Ralko as celebrant. Barb will be laid to rest beside her husband, Warren in Mt. Olive Cemetery. Memorial Contributions may be made to St. Nicholas Catholic Church, 955 East Main, Zanesville, Ohio 43701 or Franciscan Sisters of Christian Charity, 2409 South Alverno Road, Manitowoc, WI 54220, in Barb's memory. To sign the online register book or to send a personal condolence note please visit www.hilliscombsnestor.com

Barbara A. Cherrington Mendelson, 83 of Zanesville, died 12:05 AM, Thursday, February 14, 2019, at Genesis Hospital following a brief illness. She was born March 19, 1935, in Zanesville, the daughter of Paul Cherrington and Fern (Glaub) Cherrington.... View Obituary & Service Information

The family of Barbara A. Cherrington Mendelson created this Life Tributes page to make it easy to share your memories.

Send flowers to the Mendelson family.