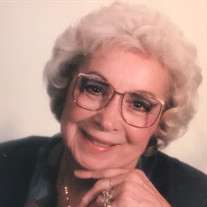 Alma G. Miller, 96 of Zanesville, died 4:10 PM, Thursday, January 10, 2019, at The Glen of Cincinnati. She was born Friday, May 12, 1922, in Zanesville, the daughter of Nicholas Malone and Genevieve (Burkhard) Malone. She married Donald P.... View Obituary & Service Information

The family of Alma G. Miller created this Life Tributes page to make it easy to share your memories.

Send flowers to the Miller family.